Tea Party Express, the nation’s largest Tea Party political action committee, will host the official Tea Party response to President Obama’s State of the Union Address directly following the Republican response. This year Congressman Curt Clawson will deliver the Tea Party response at the National Press Club in Washington, D.C. and will focus on pertinent issues which are affecting all Americans.

Being our first Tea Party win of the recent election cycle, Clawson brings new ideas and solutions to Washington and the President’s failing policies. Curt earned his MBA at Harvard Business School and has been a successful businessman. He calls for tax policy reform, including cutting the current corporate tax rate which is currently the highest in the country.

President Obama will continue to preach how bigger government is the solution to our lives and problems but Congressman Clawson will bring conservative principles and truths to the table in his rebuttal. Curt understands it is the competitive spirit of Americans and a government that gets out of our way as the only true solution to creating jobs and establishing a thriving economy.

Join us right here on our website as we live stream the event.

We also ask all of you to help us bring the truth to our country and donate today to help us cover our costs and reach our goal of $25,000 dollars by 5 PM ET, Monday, January 19th. 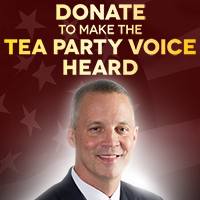