Thank God Obama and the Democrats’ attempt to raise the federal minimum wage to $10.10 per hour stalled in the Senate. 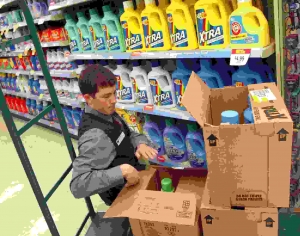 How much can Mr Joe American grocery store owner afford to pay an unskilled worker just entering the work force? When government pulls an amount out of the air that it believes is a fair hourly wage and forces it on business owners, business owners are forced to make real world economic decisions.

So, rather than Mr Joe American grocery store owner hiring 5 kids for the summer to stack boxes and gather shopping carts in the parking lot, he only hires two kids or none and gathers the carts himself. Traditionally, as one’s knowledge, skills and value to a business increases, so does their pay.

My pet peeve with liberal’s and Democrats’ vision for America is that they always appeal to our lower nature. They gin-up hatred for people who have more than you. As a matter of fact, you have too little because others have too much. Therefore, it is only fair that we empower government to take their stuff and redistribute it to you.

Democrats and liberals say, hey, you want to kill your baby in the final month before birth, no problem. Shame on hateful Republicans and conservatives for trying to change your mind.

Democrats say do not be a sucker like those immigrants who follow the process, assimilate and become U.S. Citizens legally. Just sneak across our borders and we will roll out the red carpet for you.

In their tradition of lowered expectations and standards of behavior, Democrats are not concerned with encouraging employees to better themselves to increase their value to the business beyond minimum wage pay. Instead, with main stream media support, Dems sell the message that employers are mean greedy SOBs. Dems vow to force them to pay employees more money simply for showing up. After all, it is only fair.

Do you see the pattern? Democrats and liberals always encourage a lower behavioral standard and gin-up class envy, division and hate.

Democrats have the audacity to frame the minimum wage as a moral issue. I submit that the Democrats’ approach to minimum wage is immoral; totally based on a “gimme” mindset without giving a hoot about the employer or the business.

Remember the biblical tale of the talents (money)? Before leaving on a business trip, a master gave various amounts of money to three servants to invest. To one servant he gave 5 talents. The second he gave 2 and to the third he gave one talent. Both servants with 5 and 2 talents invested their master’s money, made a profit and were rewarded. The third servant who chose to remain at “minimum wage level”, buried his master’s money for safe keeping, earning nothing for his master. The master was extremely angry with him.

As a proud conservative, I wish to offer a powerful proven truth to young people entering the work force. Reject the Democrats’ low-rent manipulative you’re-a-victim class envy rhetoric regarding the minimum wage. You are so much better than who the Democrats think you are.

When you apply at Mr Joe American’s grocery store for a job, tell him you want to help make his store the most popular in town. Yes, I realize that may sound corny today. But, it works.

When you come to the business with an attitude of how can I be a blessing to Mr. Joe, you get blessed, promoted and paid. Perform on a level that there is a noticeable void when you are not there.

Several years ago, I worked in the art department of a TV station; a crew of six artists. Whenever our boss was unavailable, young Jeff voluntarily stepped up to deal with whatever. When Jeff was first to be promoted, jealous fellow artists murmured. They accused Jeff of being a butt kisser. The reality was Jeff earned his promotion; the difference between winners and whiny entitlement minded losers.

The secret to success is bringing an attitude of “how can I be a blessing” to every situation. Successful people provide or create goods and services that people want and or need. I am not suggesting that you will never encounter an abusive unappreciative boss. I am saying that bringing an attitude of how can I assist my employer to increase his bottom line and make his day a little easier will ultimately reap an employee great rewards.

Have you ever heard liberals and Democrats speak of giving to ones employer? I think not.

As is the case in most of what they advocate, the Democrats and liberals mantra is you’re-a-victim and you’re entitled. Now, gimme!