Hello! GOP! Anybody home? In case you guys in DC do not know, there’s a gubernatorial race happening in Virginia in a week. While our guy Conservative Republican Ken Cuccinelli is amazingly holding his own, in terms of campaign spending, the Democrats are kicking our butts. 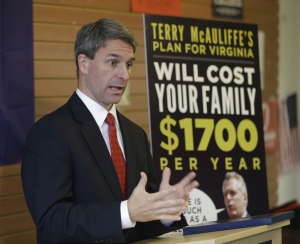 Meanwhile, We the People, grassroots across America are passionately engaged and have made the race tightly competitive. Remarkably, polls show the Virginia race down to 1%. Turnout will be the deciding factor.

For those of you unaware, I am Chairman of Conservative Campaign Committee. Showing my age, do you remember the TV show, “Have Gun Will Travel” starring Richard Boone as Paladin? Think of me as a Paladin armed with the Constitution, traveling the country delivering political justice.

We get involved in key races which have national repercussions. Our goal is to restore America back to the vision of our founding fathers; individual liberty and freedom. Our game plan is quite simple, elect as many Conservatives as possible.

Battered, scared and outspent in the Lonegan race, we have licked our wounds and dived head first into helping conservative Republican Ken Cuccinelli defeat the hardcore liberal Democrat candidate for the governorship of Virginia.

Here is what our independent expenditure campaign is doing in support of Cuccinelli. We are heavy on newscasts but also have bought NBC’s Sunday Night Football, the World Series, FOX & CBS NFL Football, College Football, and the Sunday national political news shows (Face the Nation, Meet the Press, This Week, and Fox News Sunday). As you can imagine, these media buys are expensive. Such is the political arena in which we are forced to fight.

With the Virginia gubernatorial election only a week away, Democrats are staying true to their play book. Our Liar and Chief will campaign with the Democrat candidate this weekend and New York Mayor Bloomberg has funded a nearly $2 million ad blitz smearing our conservative candidate, Cuccinelli.

FYI folks, Ken Cuccinelli was the first Attorney General in the country to sue the federal government over Obamacare. A firm believer in individual freedom and limited government, Cuccinelli thinks Obamacare violates both principles. Do you see why we need this guy to win folks?

I am extremely excited and proud of the the work our team at Conservative Campaign Committee is doing. Preparing for the home stretch, our Ms Lulu is fired up as well as her call-from-home volunteers. Please check out the latest TV ads we have produced supporting Cuccinelli.

With little help from the GOP, it is up to us, We The People.