Today is the one year anniversary of Ted Cruz’s historic Texas-sized Tea Party victory. Grassroots conservatives from across the country came together to take a stand with Ted against the Washington, D.C. establishment. Now, a year later, we are preparing to do it again in 2014 Midterm Elections.

We could not be more proud of the job he has done since arriving in Washington, D.C. We took a stand for him, and now he is taking a stand for us. Unfortunately, Cruz has been attacked by Democrats, Republicans, and the media for adhering to his campaign promises and taking principled stands.

While Cruz is fighting the good fight, being in the minority puts him at a great disadvantage. We are 6 seats short of holding a majority in the Senate, and Ted needs reinforcements. It is up to you and me to fight across this country to elect more leaders like Ted Cruz.

The false narrative continues to be written that the tea party is dead and 2014 will not be like 2010. However, every month we see a strong example to the contrary. As Rush Limbaugh predicts for 2014, “They (the Tea Party) have more reasons than ever to turn out: Stopping Obama from totally controlling all the branches of the government.”

The Tea Party Express is hitting the road in search of excellent conservative candidates and are beginning to lay the groundwork for the 2014 campaigns. We plan to target 25 House races in addition to 7 to 10 Senate races across the country in 2014.

We hope you will join us in this fight. 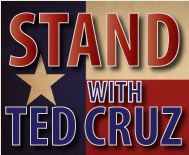