The Tea Party Express VIII – Winning For America Tour just finished it’s sixth day. It has been a great start to the tour having held several rallies in Florida, Georgia and covering the state of North Carolina. The number of first time attendees at a Tea Party rally were surprising. When talking to folks we were told they are coming out to show support and get informed. They are trying to find out if the liberal media is lying to them about the demise of the Tea Party. We assure them that “Yes, the media is lying! The Tea Party is alive and well.” 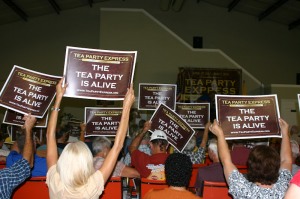 Several people mentioned to us that the media seems to be trying to make them believe we have no hope. Folks, the liberal media is lying. They are trying to make you feel defeated so you won’t bother going to the polls to vote. But there is hope and that hope is in Mitt Romney and Paul Ryan. The crowds have been overwhelmingly enthusiastic for Romney and Ryan. We can win in November if you get out and vote! 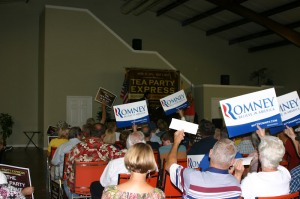 Crowds are energized and motivated to take back our White House and end the socialist agenda of Barack Obama.

We received an email from a friend just before starting the tour. He said “when you hit that stage hold nothing back. For the sake of my children and yours, hold nothing back.” We have thought of those words each time we have taken the stage and we have held nothing back. So for those of you still undecided, here are the facts. If you are thinking of not voting, then you are surrendering your vote to Obama. If you are thinking of a write in vote or voting for a third party, then you are voting for Obama. NEVER has a Presidential candidate won as a write in. 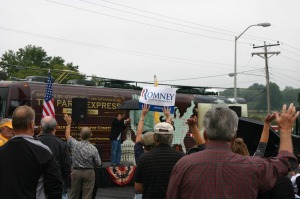 NEVER has a Presidential candidate been elected from a third party. NEVER. And it will not happen this election either. If you went to the polls during the primary and you voted your principles then you did the right thing. If your candidate didn’t win, then we’re sorry. In all honesty, ours didn’t win either. But the primaries are over. The next President and Vice President of the United States will be elected from one of the two major parties. That’s the facts. It will either be Barack Obama and Joe Biden or Mitt Romney and Paul Ryan. Those are your choices. At this point, you start from square one and you look at your principles and you pick the candidates that stand closest to what your values represent. And here’s the hard truth – if you think you’re going to skip out on voting, write in a vote, or vote for a third party, then just go ahead and vote for Barack Obama. Then you can at least take responsibility for the collapse of our economy and the loss of our nation if Obama is reelected.

As we listened tonight at the rally in Wilmington N.C. to the gentlemen who spoke about escaping communism to come to this “great country”, we were reminded of the importance of this election. Folks, our freedoms here are now at stake. Make no mistake about it. If you believe in America and love this land your choice is clear. Only one choice will keep America’s future bright. So Ron and I will proudly, and without hesitation march to the polls in November and vote for Freedom and Liberty. We will vote for Faith and Integrity. We will vote for the Constitution and the Bill of Rights. We will vote for Mitt Romney and Paul Ryan.
We must stand united to win in November. Will you stand with us in support of candidates who love America, will not apologize for being exceptional, will support our military and will bring back our economy, bring back jobs, save medicare and repeal Obamacare? Please join us in voting for Mitt Romney and Paul Ryan. 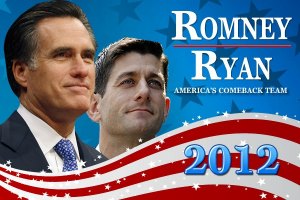 (As we traveled to join the tour we wrote a new song to show our support. It’s titled “Romney and Ryan 2012″. It can be downloaded for FREE at www.Soundclick.com/RivoliRevuefeaturingRonandKayRivoli Go there, listen to the words, then download it and send it to all your friends, family, email lists and radio stations in your area. We must stand united to elect Romney and Ryan in November.)