Last week we brought you Ted Cruz: The Stakes, the first in a series of videos comparing and contrasting Ted Cruz’s record with that of Lt. Governor David Dewhurst. Today we bring you “Spending,” which lays out a major contrast on who is best qualified to go to Washington and make real spending cuts. Watch the video:

During his tenure as Lt. Governor, Dewhurst led a State Senate budget that was a total of $5.8 billion MORE in proposed spending than the State House. Ted Cruz knows that as the national debt and deficit sky-rocket, we need real spending cuts, not just to slow the rate of growth, and we must pass a Balanced Budget Amendment with real teeth as soon as possible. That is why Tea Party Express was proud to travel to Texas to endorse Ted Cruz for U.S. Senate earlier this year. 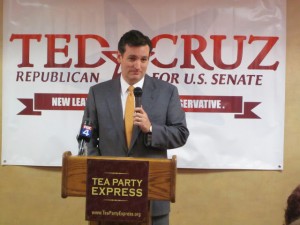