By Ted Cruz, Tea Party Express-endorsed candidate for US Senate in Texas

President Obama’s contraception mandate on religious organizations captures several aspects of his far-left ideology: 1) his assault on the Constitution, particularly the First Amendment; 2) his disdain for religious liberty, and 3) his aggressive consolidation of federal power. 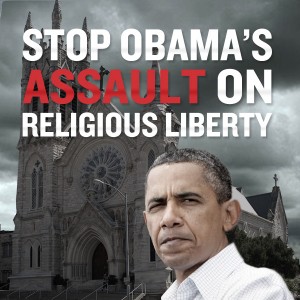 The uproar is clearly warranted.

Here’s what President Obama ordered, in the words of The Heritage Foundation:

“Under a new Obamacare mandate issued by the U.S. Department of Health and Human Services (HHS), the White House is mandating that virtually all religious employers… provide health care coverage for contraception — including abortion-inducing drugs — thereby trampling upon their constitutionally guaranteed free exercise of religion.”

In other words, the Obama Administration added specific regulations to a longstanding federal requirement that forces employers to insure their employees. (The reason religious employers have to provide health insurance in the first place is because of tax penalties, which should be eliminated and ObamaCare altogether repealed). This is yet another example of outrageous federal overreach. The federal government should leave insurance to the States, instead of regulating all aspects of our lives.

This isn’t just an attack on freedom of conscience, it’s an attack on everyone’s freedom, and proves the point why socialized medicine is incompatible with liberty. If government controls healthcare, it has to make rules, and those rules will inevitably restrict our freedom. Add to this the reality that we have an administration led by extremists, and the point becomes more clear.

Even the worst abuses of HMOs or corporations could never result in so much power over your liberty and your life. As the esteemed Austrian economist Friedrich Hayek put it,

“The power which a multiple millionaire, who may be my neighbor and perhaps my employer, has over me is very much less than that which the smallest functionary possesses who wields the coercive power of the state, and on whose discretion it depends whether and how I am to be allowed to live or to work.”

This battle is just the beginning of what we will see daily if Obamacare is not stopped. Socialized medicine can have only one end: the sacrificing of individual liberty to collective “rights” and the vesting of healthcare decisions not in the hands of the patient, but in the hands of bureaucrats.

Conservatives like Senator Marco Rubio are speaking out. But they need allies in the Senate. Even if Obama is defeated, his healthcare plan is a ticking time bomb that will take away our freedoms one piece at a time. To repeal it, we need Senators who will stand and fight–tirelessly, and every day–for the Constitution and for liberty.