Part 1 ended with the idea that It’s time to cut spending. The left blames the Iraq war for deficits, but that just doesn’t add up. 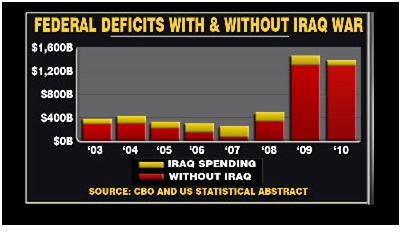 Obama and the left claim apocalypse will occur if you cut anything from the budget. Any time someone claims that immediate spending cuts will harm the economy –ignore them, laugh at them, mock them. You know why? Because spending never goes down. Never. Republicans, Democrats and the Press all deceive you when they use the word “cut.” When businesses cut expenses, spending declines. When people cut their bills, they spend less. But when government “cuts” spending, the total amount spent still rises, always. And the Press never explains this properly.

While any tax increase occurs immediately, another sleight of hand is that the spending “cuts” are planned for the last couple of years of any ten year deal, as in years eight, nine, and ten. So they know it will never happen. It’s four or five Congresses from now. Laws change. Deals are forgotten. Promises are broken. The only thing that really matters is next year’s budget. Will it be less than the previous year? Now that would be a real cut. All that other “deal” stuff? Increased spending. Politicians want deals; Americans want solutions.

Obama used the word “balanced” so many times in the recent debt-limit debate it must focus-group well, but the only thing he never would accept was a balanced budget. He claims he inherited his problems. Well get over it. Every president inherits the problems left behind by the previous administration.

I’ll tell you what else Obama inherited, a triple-A credit rating. He tried to blame losing that on the Tea Party! First they claim the Tea Party is fake, astro-turf, small and losing influence; then they turn around and claim we are so powerful we impacted the entire economy of the United States. I guess being President isn’t enough power. Obama should try organizing a community Tea Party.

Obama loves to blame others for his poor job performance: “It’s Bush’s fault.” Obama demonized Bush as an evil fool, but Obama has adopted and continued many of Bush’s policies, and justifies the bad result by saying “Bush did it first!” The Press lets him have it both ways, but we know better. He said we should change what Bush was doing, and a majority agreed. The problem is, Obama made it worse. 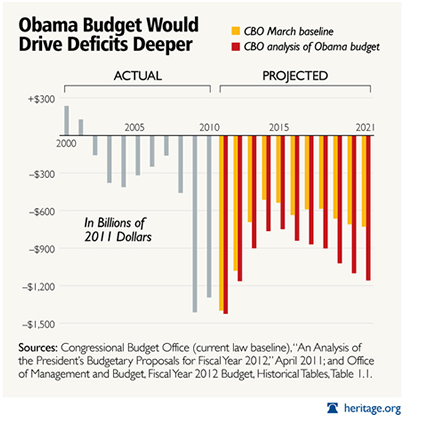 Obama has never before run on a record. He’s always run almost literally on words. Hypnotic charm, clever phrases spoken with flare. Speechwriters and tele-prompters. Now he must defend what he has done, and what he has failed to do.

What is Obama’s record? Sustained high unemployment as a new norm; he has lost the AAA credit rating; he has added more to the national debt than any other president ever; he has more than tripled the annual deficit; he has implemented socialized medicine with Obamacare while health insurance costs continue to rise; he has failed to “stimulate” the economy; he has stopped off shore domestic oil exploration making us more dependent upon foreign sources for energy.

Obama claims he has leveled off the economy. If Obama were a pilot and he crashed a plane into the ground, would you say he leveled off?

Answering this failed record the administration says it hasn’t spent enough. But Obama doesn’t seem to learn from history. Henry Morgenthau Jr., the Secretary of Treasury for FDR testified before the House Ways and Means Committee on May 9, 1939 saying “We have tried spending money. We are spending more than we have ever spent before and it does not work… We have never made good on our promises…after eight years of this administration we have just as much unemployment as when we started….and an enormous debt to boot!”\
Nobody has ever spent a country into prosperity, but Obama’s dogma won’t allow him to learn from history.

The recent victory in Wisconsin shows us the way forward. Gov. Walker brought a $3.6 billion budget deficit into a surplus in less than 6 months without raising taxes. He did it by gaining control over the spending obligations. It’s time to follow that lead nationwide. Revenues will increase through more prosperity. Grow the number of taxpayers by increasing employment rather than taking an ever larger share from those already struggling. Economic growth is the only way out of debt.

President Ronald Reagan said “Freedom is not something to be secured in any one moment of time. We must struggle to preserve it every day. And Freedom is never more than one generation from extinction.”

If we intend on passing the torch of freedom to the next generation, let us return our government to its Constitutional moorings. That would be real change. Let us not grow weary in the effort. Our nation’s future depends upon our vigilance. Our freedoms, and that of our posterity, depend upon it.